It's a cold, rainy night. Why not check on your friend?

Made for the Two-Minute Horror Jam. This game contains horror themes and gore. It is made for a mature audience only.

Best played downloaded, but can also be played in browser (make sure your browser isn't zoomed in or out). The game is made to run in 1920x1080 resolution.

Browser users: If you are finding any of the image or text is cut off, put your browser in fullscreen mode (F11 for Windows/Linux, Command+Shift+F for Mac).

If you dig this game and want to see more, please consider donating either through itch.io (preferred!) or https://ko-fi.com/uncannymachines. Thanks!

played your game second in this video and found it to be really witty,  i think this game was perfect for the game jam looking forward to seeing more of your work ^_^

Hey! Thanks so much for playing the game! It is really helpful seeing how navigate around the kitchen, gives me ideas on how I can improve my design for the future. Glad you enjoyed it and got a little bit spooked!

Thanks for Checking In, friend.

Unfortunately for me I'm unable to play it even when I put my browser in full screen mode the images and text are still cut off.

Heya! Sorry you're having trouble - could you let me know what browser and OS you are on? I am pretty rubbish with this side of things but keen to try and fix it for you.

You might be able to try the downloadable version if you're keen!

I'm on google chrome and 64bit os. I also did try the downloaded version after my attempt with the browser version but unfortunately got the same result.

Edit: oh right I had forgot you mentioned its meant to run on 1920x1080. I'm sorry about that I didn't mean to waste some of your time like that my apologies.

This game was quite a bit of fun for something so short, and one of the few two minute horror games that actually seemed to stick with the format of being two minutes haha

I wasn't actually expecting the game to go the way it did, on re-watching my footage I noticed those little extra clues and details that alluded to how things were gonna go, which was a nice touch.

It was short and sweet, well done.

The game is the first one played in the video :)

Firstly, sorry that you hit on the game breaking glitch that gives things away a little early! I'm glad you had fun with it though, I have to say your commentary was hilarious. Loved your other play throughs of spooky games, too! Nice work!

And of course...thanks for checking in, friend!

This reminds me of that one movie (which I forgot the name). It's about a dad chopped up the whole family and start making meat steam buns and feed/sell to people! By the time the policy gets involved, everything is... gone... so horrible and disgusting. Friends are not food!

Hey thanks for playing! Loved your reaction!

The art was great, the story was great and even the little cursor that became a happy face was a nice touch. Didn't see the end coming even though there were several clues around the area (Like the poster, which i only realised while editing.) I thought it was a pretty straightforward game and was a great short game to play.

The only thing I would suggest is maybe spooky things that would lead up to the end; finding the head in the fridge. Like maybe some suspicoius lines of nothing being able to sate your hunger or some interesting tools around the kitchen that wouldn't normally be there or maybe some 'ketchup; on the counter or something like that.

But yeah, it was a blas tot play and had fun with it. Especially since I didn't know what to expect, was taken aback by the end. Overall a great game and you'e done a great job on it!

Wow, thanks for such detailed feedback! I'm so glad you enjoyed it mate - having some more disturbing clues throughout is a great idea. Enjoyed your video and glad I could spook you :p

Thanks for checking in, friend!

Lmaooo this kinda good, a little extra hours fixing the glithches and adding some hints may mad ethis a lot more better but its was funnnnn keeop goinggg

Heya thanks! You're right - I should probably circle back on this and do a little update. Make it all a bit smoother, and maybe add a highlight to objects that can be clicked on (the smiley face changes, but I don't think that's enough!). Appreciate you playing it.

Hey I checked out Checking In! I had some small UI issues but nothing that detracted from the experience. A nice, short, unsettling game. It's featured in my video starting at 10:55.

Heya, thanks so much for playing! Sorry you hit those glitches (the text was also doing some weird stuff for you at the end there). Appreciate you giving it a second go after it bugged out on you. I'll see if I can smooth those bugs out with an update. Thanks very much for...checking in!

No worries, I know bugs/glitches can be hard to squash. And thanks! I really did enjoy it. 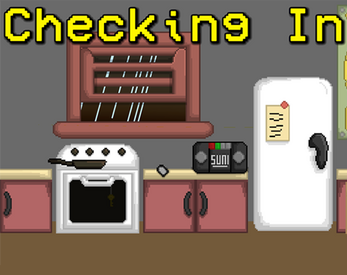